The calendar for the world’s richest ocean paddling competition – the 2022 Shaw and Partners Ocean Racing Series – is locked in and set to go, with the Australia-wide series boasting 16 events in five states, a $350 000 plus prize pool, and a February 20 start on spectacular Sydney Harbour.

The Series features the country’s largest and most inclusive paddling events, bringing together beginner and intermediate paddlers through to the elite.  Aged from 14 to 70 plus, they compete on a variety of ocean craft from single ocean skis and SUPS, to double ocean skis, canoes and paddleboards.

With 16 races on the calendar, there’s a host of formats, distances, weather and water conditions to   test competitors’ endurance and skill, starting with round one – an 11km hit-out on spectacular Sydney Harbour, the Manly Wharf Bridge to Beach on Sunday morning February 20.

Moving on, paddlers will face everything from a 14 km dash, The Chucky, off Sydney’s Collaroy to WA’s great Rottnest adventure dubbed The Doctor – a 27km open-ocean enduro. There’s also race weekends in Forster (NSW) and the Sunshine Coast (QLD), competitions on Sydney’s northern and eastern beaches, a hit-out in Hobart and a mid-winter torture test off Adelaide.

The elite start-list brims with the legends of the ocean:  past and present Olympians, professional kayakers, canoeists and surf lifesavers, board paddlers, ironmen and ironwomen, all set for a national title chase.  But most entrants are everyday training buddies, teens having a red hot go, mums keeping fit and old sea dogs who just love paddling.

In the women’s division, expect the neck-and-neck battle to continue between Central Coast’s Jemma Smith and NZ’s Danielle McKenzie, with challenges coming from the likes of Tasmania’s Georgia Laird and Newport’s Hannah Minogue.

Paddling has boomed during COVID, with many finding an hour training on the water the perfect way to socially distance whilst building physical and mental fitness.

Thousands have ordered ocean skis and paddle boards over the last two years, and entry lists of over 500 paddlers are expected for races on the Shaw and Partners Series. 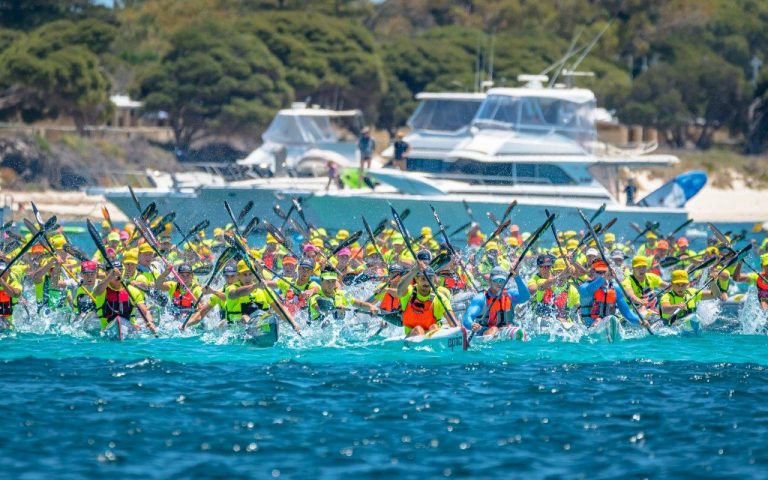 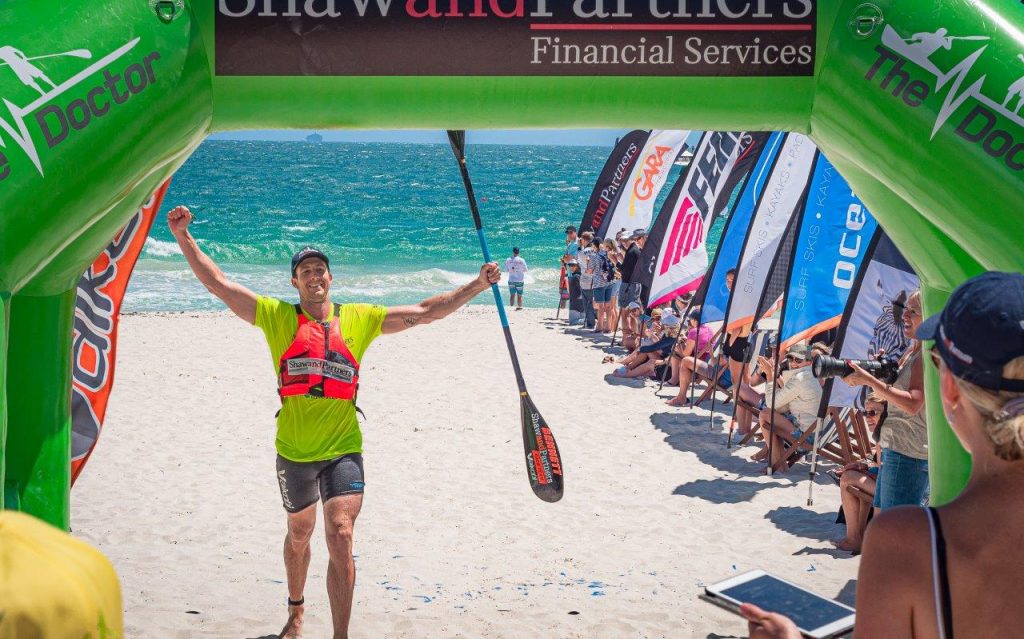 “It’s exciting to launch a national series for 2022 after the last two years of COVID.  Paddling actually boomed during lockdown, because it really was the perfect sport to maintain social distancing, stay in contact with people and keep fit – and thousands of people just got on board, literally,” said series organiser and nine-times Molokai winner, Dean Gardiner.

“Now it’s time to put that training to the test. This calendar is super-exciting, incredibly varied and will throw up a challenge for everyone.  Plus as a sweetener, there’s a $350 000 prize pot from Shaw and Partners Financial Services to make mid-winter training and racing really worthwhile!.” 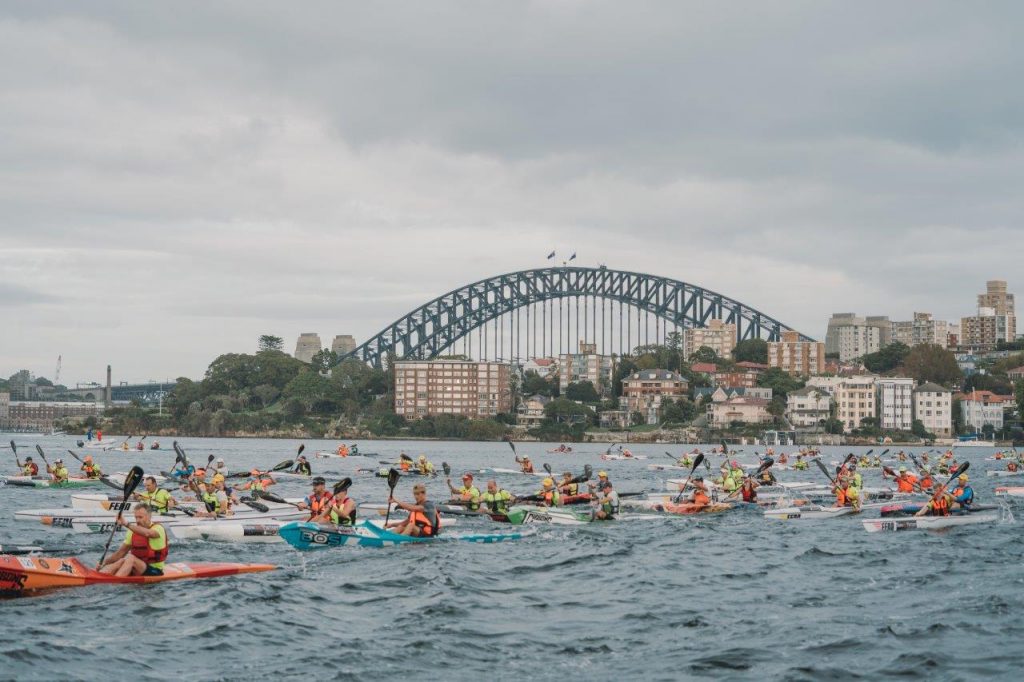 The Shaw and Partners Australian Ocean Racing Series kicks off with the Manly Wharf Bridge to Beach on February 20, an 11 km relatively flat water course from under the Sydney Harbour Bridge to Manly Wharf; before the field meets its next challenge at Sydney’s Collaroy – The Chucky on March 19, an out-and-back around Long Reef.

April’s venue is on the NSW mid-north coast where paddlers converge for Forster Race Weekend and the double – the Nine Mile on April 22 and the 21 km Forster Ocean Classic on April 23.

From there it’s the warmer waters of Queensland with the Hells Gates 38 from Mooloolaba to Noosa on June 4; before heading for a mid-winter workout off Adelaide’s O’Sullivan’s beach with the SA Ocean Series Race on August 20.

New to the Series on September 3 will be The Old Woman Ocean Paddle from the Sunshine Coast’s Mooloolaba beach around the famous Old Woman Island, and then the title-fight heads back to Sydney’s eastern suburbs in October for the North Bondi Surf Ski Classic.

November’s programme is packed, with the Surf Safari in Hobart, before the field travels west for the Mandurah Duel on November 13, the primer for Shaw and Partners WA Race Week from November 19-26.

The seven-day WA paddling fest boasts an exhausting, yet exhilarating week of racing that will test even the fittest and culminates with the holy grail of ocean paddling, The Doctor on November 26.  Not for the faint-hearted, it’s a 27 km enduro from Rottnest Island to Sorrento Beach – the only open-ocean crossing in the series – and staged on a body of water that produces some of the longest and fastest, surfable chop in the world.

The 2022 series wraps up pre-Christmas on Sydney’s northern beaches with the 20 Beaches Ocean Classic between Collaroy and Palm Beach, where the 2022 champions will be crowned.

The charity partner for the 2022 Series is Gotcha4Life with paddlers donating money to support their work.  Gotcha4Life is a not-for-profit foundation with a goal of zero suicides, taking action by delivering mental fitness programs that engage, educate and empower local communities. Their programs create meaningful mateship, build emotional muscle, and strengthen social connection in local communities.

For all information and entry registration for the Shaw and Partners Australian Ocean Racing Series including February 20’s round one, the Manly Wharf Bridge to Beach, go to oceanpaddler.com

For Series information and entries go to https://oceanpaddler.com/ocean-events/australian-ocean-racing-series/

For further media information   Ingrid Roepers on mobile 04 111 989 44 or iroepers@irpr.com.au 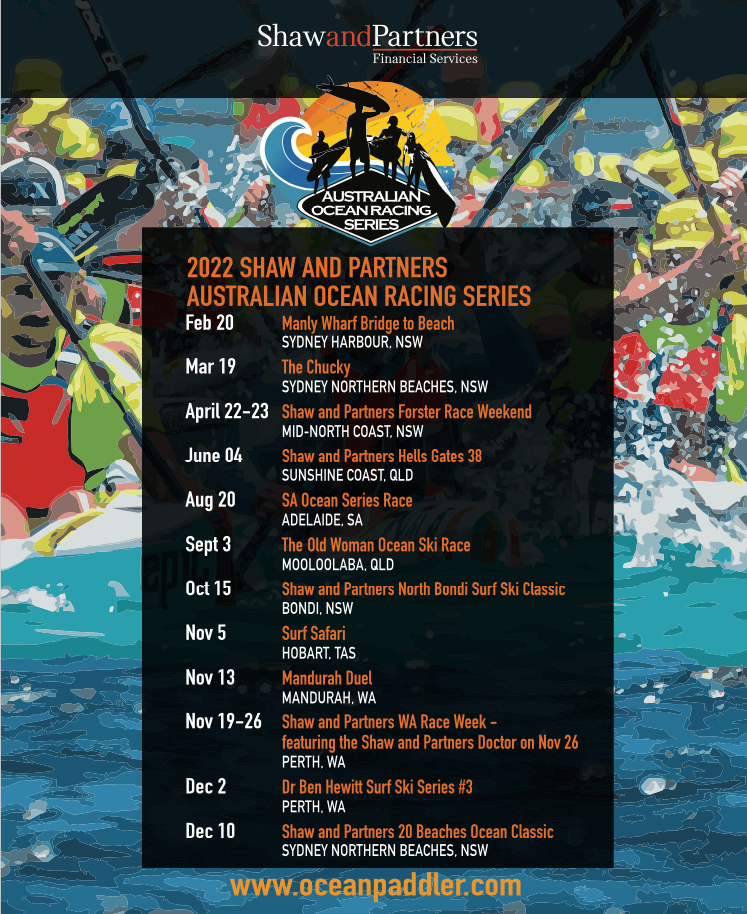